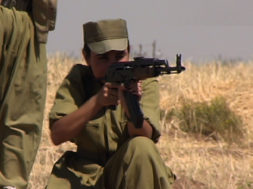 An in depth look at the Kurdish resistance movement in Northern Iraq. The authors are among of the only film makers who traveled illegally during the summer of 2002 in the northern provinces of Iraq, the non-fly zone under UN protection beyond the control of Saddam Hussein. Here the US army was looking for military supporters for their alliance against Saddam Hussein. From here the US troops were planing to invade the country and to topple the regime in Baghdad.

How does these people think about an attack? What are their expectations and hopes for Iraq? The film explores this situation from many sides, showing the complexity of problems in the area through the life’s and fate of individuals.

Everybody wants a change in Baghdad, but the fear of being the first target in a retaliatory strike is big. Especially the population of the province town Halabja lives in permanent fear: in 1988 they were the target of an gas attack by the regime in Baghdad. 10.000 people are still suffering from this attack.

The Kurdish leaders want to use the invasion to solve their own regional conflicts. An Islamic Militant group called Ansar al-Islam controls an huge area in the mountains near Iran and have regularly exchange fire with the Kurds. The spiritual leader of the Islamists is interviewed by the authors, he confirms an ideological relation between Ansar al-Islam and al-Quaida, but refuses the existence of an organized network. A captured Islamic militant tells another story, he says al-Quaida tries to establish a new headquarter in north Iraq. But this interview took place in front of the Kurdish secret service.

The Shia opposition group with a 60% majority of the population in Iraq -wants to topple the regime as soon as possible. But can we trust the group whose leader lives in Iran?

In Nothern Iraq there is also an opposition to the new war: the Turkmen front wants a regime change in Baghdad but claims to be suppressed by the Kurdish majority in the area. The christian  Movement fears the aftermath of a Kurdish victory and is skeptical about the democratic development in the future Iraq.