Previous Video A Dream of Freedom - The Kurds in Iraq
Next Video The Story of Water Sprite
prev next
Documentaries
15. November 2004
Thomas Büsch 0 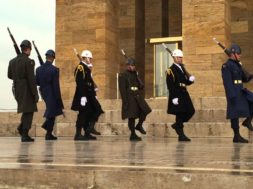 This picture gives an overview of the developments in Turkey regarding the EU; it describes the recent reform process and its status of implementation reflecting the positions on Turkey as a potential candidate for the EU. Politicians and experts will be interviewed expressing their opinion and expectation, among them we talked with the Turkish Foreign Minister Abdullah Gül and with experts as Nilüfer Narli (Kadir Has University, Istanbul), Francois Perouse (French Anatolian Institute, Istanbul) and Heinz Kramer (German Institute for International Politics and Security, Berlin) and others.

The documentary focuses on the following: the history of Turkey and the idea of it in Europe; the Islamic religion regarding the Republic of Turkey; economy and competition; the role of the security forces; and finally the strategic and geopolitical aspects of Turkey regarding an EU enlargement.

The shooting took place in Istanbul, Ankara and Diyarbakir and in Berlin and Strasbourg.