The Story of Water Sprite 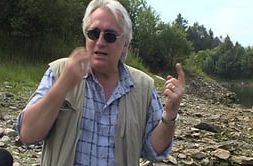 The Story of Water Sprite

official selection at the following festivals:

Antonin Mares is living in Munich as a writer and translator. After escaping from Czech Republic in 1968 he had lost contact to his homeland for twenty years. In the Nineties he discovered, that Czech Republic is not any more the country he had left as a seventeen year old. The attempts to reconnect are lasting until today.

In 1997 there was a big flood in Morava, the part of Czech Republic, Antonin Mares is originally coming from. The natural catastrophe inspired him to write a short story called “The Water Sprite”. The experience of exile is transformed to a fairy tale in this narration.

The documentary features Antonin Mares on a journey through Czech Republic. Together with his nephew Frantisek he visits central locations of his narration “Water Sprite”. Slowly the connection between the fictional story and Mares biography appear. Beside uncle and nephew experience, that at the end of the journey they have connected to each other.

The element water is used as a central metaphor in the film. Floods, Venice, Water Sprite are symbols of the rebellious side of nature. Beyond the effects of historical developments on individual life-stories it stays uncontrollable and uncertain. Or as Mares notes: Water flows, you can‘t force it into a line, it evaporates and comes down next year at a place where I won‘t be.

0
20   0
previous The Turkish Perspective
next Hüseyin B. Alptekin