Previous Video On The Run
Next Video Returnees at the Nineveh Plains
prev next
Investigative Programs
16. November 2015
Thomas Büsch 0 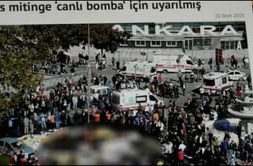 A short program about artists, actors and journalists in Turkey after the bomb attacks in Ankara, Octobre 2015.

Just befor the election on November 1 the art scene in Turkey was rebellious than ever. Despite a ban on demonstrations in Taksim Square, a theater group is performing in memory of the bomb attacks during a peace demonstration in Ankara.

Carolyn Christov-Bakargiev, curator of the 14th Istanbul Biennale reacts subtly to the current political atmosphere in the region and praised the innovative power of the local art scene.