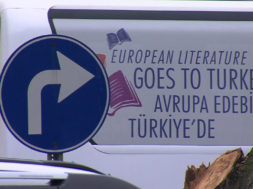 Documentary about an arts tour organized by the Goethe-Instiut Istanbul
60 Min., HD, Istanbul 2011

Official selection at the following festivals:

Directed and Edited by Sabine Küper-Büsch and Thomas Büsch

This film is produced within the scope of the European Literature goes to Turkey – Turkish Literature goes to Europe project, conceived and implemented by the Goethe-Institut in collaboration with Anadolu Kültür. This project forms part of the EU-Turkey Civil Society Dialogue: Cultural Bridges Programme for EU–Turkey Civil Society Dialogue funded by the European Union.

Continuing in the EU, the tour finally showcased readings by Turkish authors and concerts by various Turkish musicians in Sofia, Bucharest, Vienna, Venice, Zurich, and the two other Capitals of Culture 2010, Pécs and Essen.

Accompanying the tour was a bookmobile containing the showcased literature. The bookmobile itself became a meeting point and a platform for exchange.

The filmmakers Sabine Küper-Büsch and Thomas Büsch traveled one year with the bookmobile throughout Turkey and the European cities and documented these exceptional events of this high-profile arts tour at selected locations in Turkey and Europe.

The film accompanies the bookmobile from the port city of Trabzon in eastern Turkey over Ankara, Diyarbakir, Konya, Antakya, Adana, Izmir, Tekirdag and Istanbul, and finally resumes in the European cities of Pécs, Venice, Duisburg and Brussels.

The protagonists of the film – the Turkish bus driver, Hakan Köroglu, and the German librarian of the bookmobile, Claudia Dollinger, reflect their impressions of the trip throughout the tour. Not only different, cultural aspects are to be shown, but also the communication problems that exist between the two, as Hakan speaks only Turkish and Claudia much but not Turkish. During the tour they develop a partially idiosyncratic communication. The audience discovers together with Hakan and Claudia a complex understanding of differences and different perspectives.

Selected writers – such as Günter Grass, Zafer Senocak, Pericles Monioudis or Elif Safak – describe partially in in-depth portraits their views and feelings about differences, personal origins and a common senses of expression and history. The dialogue between cultures will continue through discussions and interviews with pupils and students which have participated in the events everywhere in Turkey and Europe.

The documentary is complemented by cuttings of short films that originated in a series of video workshops on ‘Cultural Bridges’ and Turkey in the frame of the tour. Under the guidance of the filmmakers and in collaboration with the film critic Selim Eyüboglu and the designer Dinc Erem Tapa students of film schools in various Turkish cities produced short films that deal with the different cultural and political aspects of life in Turkey. These cuttings complement the statements and interviews of the noted writers and artists throughout the movie; they reflect in a typical Turkish coffee house like atmosphere their expectation regarding Europe and the future of Turkey.

0
7   0
previous Bodrum: exclusive Jewel of the Agean
next Dennis Gün