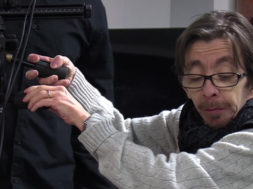 Trailer of a docuemtary about the artist Dennis Gün

Directed and Edited by Thomas Büsch and Sabine Küper-Büsch

Dennis Gün (*1956 in Istanbul) studied painting and art philosophy at the Akademie der bildenden Künste (Academy of Fine Arts) in Vienna, followed by the study of astrophysics. The artist worked in the last years with staged and spontaneous photography alike. However, he specialized in orchestrated photographs that seem like open-ended narratives. Although there is a concept behind these works, they are not conceptual. They can be described as Baroque allegories of light and shadow, depth and space. Gün critically explored historical, art historical, scientific, and mythological themes, dealing far more critically with philosophical than with political aspects.

The movie features works by the artist dating from 2008 to 2010. The 2 filmmaker discover with the artist his world of imagination and inspiration. The art historian Jürgen Schilling explains us the historian context of Güns art works.