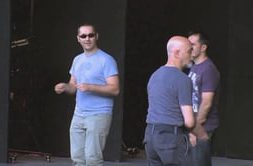 Erdogan, who dabbled in amateur dramatics as a student, has a reputation for wearing his heart on his sleeve. But his tirades against “arrogant, alcoholic actors” and an arts establishment he claims holds ordinary people in contempt have shocked Turkey.

Theatres cannot take government subsidies and then criticise the hand that feeds them, he said. “They have started to humiliate and look down on us and all conservatives.”

Actors took to the streets in protest after civil servants were handed artistic control of Istanbul theatres overnight last month in a separate row over an “obscene” play.

“If support is needed, then we the government can support the plays we want,” Erdogan said. “I am privatising the theatre. No theatres are being run by the state in almost any developed country. Here there is freedom. When we privatise the theatres you can play whatever you want. Sorry, but you cannot get your salary from the municipality and then criticise the management. There is no such absurdity.”