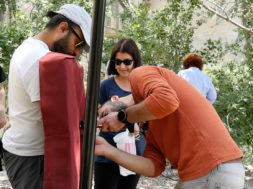 In the Cappadocia cave landscape of Turkey, entire subterranean cities have been formed for centuries as protection against persecution. The title “Silence” for the Cappadox Festival, which begins on June 14, also names the anxious waiting for the presidential elections in Turkey on June 24, which will determine the political future of the country.